Anyone who knows pilgrim history (2 raised their hands) has heard of John Alden. Few, however have heard of Ron Alden, John’s estranged brother, and the resulting offspring of an affair their mother had with a local turkey farmer. And of those, none know the true story of him and how he single-handedly changed Thanksgiving Dinner forever.

For those who are familiar with Ron’s tale (0 raised their hands because it doesn’t exist) they know that no one was better mannered, caring, and giving than Ron Alden. According to his Wikipedia page it states that “Ron was an outstanding citizen who often passed up tomfoolery to help others in need.”

It wasn’t until his teenage years that his life course took a nasty turn and his vice reared its ugly talons.

Ron as a young boy. He had already begun his turkey fetish

He was addicted to turkey.

Some historians believe that the story of Ron Alden was lost in translation over the years, but at the turn of the century, new rumors began to surface that he wasn’t the philanthropist once believed. It was at that point scholars decided to delve deeper down the turkey gizzard.

The truth of the matter was, he actually was a real pumpkinhole.

We dug through the archives to try and set the story straight and came across a 1637 interview with a friend of Ron’s conducted by the Mayflower Journal.

Here is a transcript of the tantalizing article:

Mayflower: So tell us about Ron. We’ve heard he is a real pumpkinhole.

Richard “Pips” Bastille: He is a real pumpkinhole.

Mayflower: Yeah we just said that.

The truth of the matter was that Ron did his best to hide his turkey addiction but ultimately he couldn’t.

According to reports, police officers once came upon Alden’s wagon and found him passed out, face down on the back of his horse. After finally waking him and testing his tryptophan level, they discovered he was three times over the legal limit.

Another documented incident showed that Ron fell victim to a sting operation when he was caught purchasing illegal turkeys from a notorious turkey dealer out of the back of a turnip truck.

Attempts at controlling his addiction, such as frequenting Turkey Anonymous for several months, were unsuccessful and on Thanksgiving Day 1641 the worst occurred. 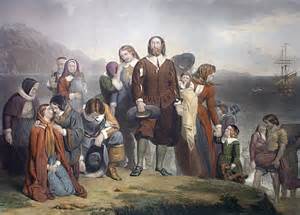 The day this picture was taken, Ron was off rummaging through turkey scraps on the other side of town, completely forgetting the photo shoot

Thanksgiving morning Ron went into town with the intent to purchase food for his family’s Thanksgiving dinner. Unbeknownst to his wife, Ron had spent nearly all of the family’s schillings on a rare type of turkey two days prior and already devoured the bird. With little money in hand he headed into town with just their old horse Henry and their newborn baby Charles.

When he arrived in town he was instantly drawn to the wondrous aroma of fire-roasted turkey. Eyeing the tasty bird roasting on the spit was too much for Ron as he shifted his last two schillings around in his pocket with his fingers.

“Can I help you sir?” the turkey seller asked.

“How much for the turkey?” Ron responded.

“I don’t have the schillings but I can give you two schillings and my horse Henry.”

“Your horse will be dead within the week. Six schillings or no turkey.”

“I don’t have six schillings, but I need that turkey.” Ron’s eyes began to widen as tasty sauce was poured on the belly of the cooking beast.

“I’ll tell you what. My wife loves babies and I’m afraid she can’t have one of her own. How about you trade me that baby for a day, and I’ll give you the turkey? You can come back here same time tomorrow and he’ll be ready, bathed, and fed for return.”

Ron handed over Charles, received his turkey, and went on his merry way.

Several hours later he returned home with turkey sauce smothered all over his face and nothing but skin and bones to show for it. He opened the door to see his wife and Charles along with the man from the market sitting in his living room.

His jaw dropped as did the turkey bone still clenched in his left hand, crashing to the floor.

He had been set up.

The very next day he checked into Jamestown Poultry & Game Addiction Center where he would spend the next ten months being fed beef and chicken products.

When he emerged, he was a changed man. He vowed to change humanity for the better, which he did until his death in 1682.

His last words on his death bed were to his wife Priscilla. He pulled her close and whispered in ear.

“I’ve sacrificed by giving up turkey for the last forty years of my life. It hasn’t been easy. Make sure that on every Thanksgiving going forward – you serve turkey. Serve it like you’ve never served it before.”

And that is how the tradition of Thanksgiving turkey came to be.

Want a good beer to drink with your Thanksgiving turkey? 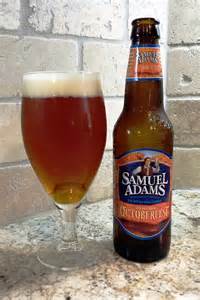 I don’t typically drink Sam Adams, but when I do, I prefer Octoberfest. I was pleasantly surprised when I tried this delight for the first time. Its malty taste is similar to a standard Sam Adams which I’ve grown tired of, but there is something more to this beer. Caramel, tasty malt, pumpkin, and hints of hops make this beer a solid brew. I highly recommend it. Best served poured into a chilled pint glass.

One thought on “The Infamous Baby-Turkey Trade of 1641: Secrets Finally Revealed”