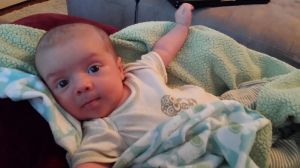 Tales from the 2nd Trimester: Part I

In the wild, satisfying your pregnant partner’s food cravings can be quite difficult. Rumor has it expectant cavemen fathers would often fake an old wooly mammoth battle injury in hopes of evading their wife’s craving requests.

Luckily today, man has traded hunting and gathering for supermarkets which are scattered all over town, allowing husbands to exchange their spears and nets for a set of car keys and mesh Trader Joe’s bags.

The best part about the second trimester? The food.

How can you beat waking up to a chili dog at three in the morning? Maybe you’re not hungry, but who in their right mind, groggy or not, would pass up a piping hot, artery-clogging meat log swimming in spicy bean & cheese delectable goodness? Not I.

Fortunately for me, my wife’s cravings were cheap and easy to find; donuts, noodles, fried rice and chocolate.  I didn’t have to hire a tracker to find and hunt exotic game nor free dive off the coast which is what I would’ve done if the craving had been something expensive like lobster or seahorse, so I can’t complain.

Some husbands aren’t so lucky. An unfortunate dad-to-be I know had to travel twice a day to Baja Fresh to satisfy his wife’s cravings. As soon as he pulled into the parking lot, they’d fire up the grill and line up the salsa since it was always the same dish. After the baby was born the place probably went out of business.

“Chicken salsa salad again sir, with a side of pain in your rear?”

Unlike the first trimester, the second trimester is a time when your wife starts to gain some pregnancy weight. The best advice I can give to any expectant father is to look for any eggshells you can find, and then go walk on them when it comes to the weight gain subject.

I had originally thought it was a good thing to tell a pregnant woman she was gaining weight, but I’ve got broken bones and a scar in the shape of a high heel as documented proof that assessment is incorrect. I guess it was a completely outlandish idea to assume that a woman growing meant the baby was growing. Good for everyone right?

“I can tell you’re gaining weight.  Your legs and butt look bigger,” I’d politely compliment excited our little bundle was growing assuming she was feeling the same.

“That is not where the baby is,” she’d snap back.

“It’s good you’re doing all this walking, it will help you lose weight,” I casually commented during a walk.

“I don’t need to lose weight there’s a baby in here.  God you’re an idiot!”

“I mean like after the baby is born…after,” I stammered as I frantically looked around for any tracks I could find so I could go backwards over them.

At that point it’s too late. There is no going back.  The shots have been fired, the bayonets are drawn and the battle bugler has “accidentally” ended up with a black eye and missing teeth. Your favorite shirt has also “accidentally” found its way down the garbage chute.

So you guys get to defend yourselves with weapons and I have this bugle? Am I supposed to Yankee doodle dandy them to death?

Best word of advice to all expectant dads – keep your trap shut at all costs. Everything you say can and will be held against you in a court of your wife. The key difference between our legal system and your wife is that once the courts determine a verdict, everyone moves on. Apparently wives have the jurisdiction to continually turn innocuous spats into lifelong recurring convictions, reminding you as many times as they desire, regardless of a prior resolution.

According to the ALTDE (Association of Lawyers That Doesn’t Exist) handbook, a felony may fall off your record after seven years, but a comment about your wife’s weight is a life sentence and subject to either death by stoning or just to continue living under the same roof. Both are equal in pain.

You’ll also want to watch out for that elusive and devious pregnancy brain. Oddly enough pregnancy brain fails to recall the moments when you told your wife you’re going out with the boys Friday night, however it remembers clear as day the time you mentioned her “going out” jeans were starting to look like someone was trying to squeeze a cantaloupe into a tennis ball can.

Years can go by and she still remembers word for word as if it was yesterday.  It’s literally a game of telephone gone terribly correct.

What’s that? The quick brown fox jumps over the lazy dog… yes… yes that’s actually spot on correct. Man this is no fun.

Disclaimer: No husbands, buglers, or tennis ball cans were injured in the events talked about in this blog. However, once the writer’s wife reads this blog, pampersnpints, can’t guarantee this disclaimer will still hold true.

There is good news – you can learn from my mistakes. Like every good husband would agree (shaking their head in a half no, half yes motion – depending on where their wife is in the room) it’s always the husband’s fault, so keep quiet and your loving wife will remain loving.

As your wife gains weight throughout the pregnancy, so can Dad. And what better way to do so than with a cold pint?

So what’s in Steve’s fridge at the moment?

The Bosteels brewery has been in operation since 1791 and is the maker of this exquisite liquid. This malt-laden tasty treat is surprisingly not brewed by monks, as many Belgian beers are, but one has got to assume at least one monk was hired at some point, over the course of 222 years, no? Are monks allowed to take regular jobs? Come to think of it I think I may have seen a monk working at Arby’s once so I’m going to say yes to that one.

Those Belgian monks really have life all figured out. They sleep. They meditate. They make beer. They live in silence. I have to go talk to my high school guidance counselor because she definitely led me astray.

Each time you take a sip of this masterpiece you capture a different robust flavor which cause your taste buds to dance with joy. Sometimes it’s fruit. Other sips you catch the hops. Others? Sweet and citrusy delightfulness. On one sip I swear I tasted an old leather shoe. It was still spectacular.

This beer is so tasty and so high in alcohol content that, after a few, one minute you’re relaxing on the couch in a state of euphoric bliss and the next you’re waking up pant-less on a street corner in downtown Brussels smothered in chocolate and waffles. Consider yourself warned.

You can usually find this beer at BevMo, Whole Foods, specialty beer liquor stores, Belgian beer pubs, and any other places that are, like, actually cool.

Fun Fact: The name “Tripel” actually stems from part of the brewing process, in which brewers use up to three times the amount of malt than a standard Trappist “Simple.” Traditionally, Tripels are bright yellow to gold in color, which is a shade or two darker than the average Pilsner. Sweetness comes from both the pale malts and higher alcohol.