After catching the first round of the baseball playoffs at a bar, I hopped on what  the SF Municipal  Transportation Agency calls a Muni Bus, but more appropriately should be called a steel loony bin on wheels. The city discovered  many years ago that the best way to rid the town of a homeless problem was to initiate a system where transients could just continually move throughout the city, instead of congregating in one spot, thus providing the illusion to commoners they don’t exist.

Alright fine I accept the charges, but please don’t make me travel on that SF Muni bus. I’ll do anything.

A convict’s bus ride to the state prison after a guilty verdict is more sterile.

I took a seat and quickly shot a look around the bus to get my bearings.  I was the most normal passenger, but that was mostly because I had over forty percent of my teeth.

My phone chimed – it was a text from the misses.

Are you coming home soon?

I sent a quick reply that I was on my way as a ghastly stench of BO hit my nostrils. I looked up expecting to see either a rotting animal carcass smothered in Indian food or a just run-of-the-mill homeless rider. Smell-wise, they are both one in the same.  Surprisingly there was no one within sniffing distance. According to the physics of odoriferous anthropology, a subject studied at colleges nowhere, a human’s stench no matter how pungent can only travel a limited distance, so I couldn’t fathom where this grotesque smell was coming from.

I kept waiting for Pepe Le Pew to come sauntering down the aisle holding up a white flag in surrender, the smell was so rancid.

I certainly didn’t rule out the fact that it could’ve been me that was causing the deathly foulness, however it seemed far more likely that a bug-ridden zombie who had just played six sets of tennis in 90% humidity had just gotten off at the previous stop on his way back to the cemetery before I hopped on. 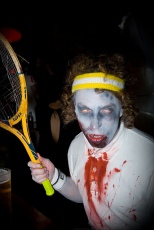 Boy tennis is fun but it makes me sweaty

Another text came through.

Were the capital U and additional question marks a typo?

Not likely. It was clearly an egregious attempt at angered subtlety.

Where the bloody f$@K are you, you good for nothing drunk is what the capital and additional punctuation clearly stood for.

Hadn’t it just been like ten minutes? How long had I been sitting there imagining smelly skunks and rotting-tennis zombies? How drunk was I –

I looked out the window and realized I was two stops past my destination.

I trudged home and after stumbling around in the kitchen for what probably felt like two hours to my wife, I made my way to the bedroom. She probably practiced what she was about to say a dozen times but was likely sick of rehearsing by the time I made it.

Oh thank god its just a man in my closet, for a second there I was worried there was going to be a pile of baby clothes

There are only a few things a man fears seeing when he comes home; a naked man hiding in his closet and his wife smoking a cigarette,  a full Nordstrom bag on a non-sale day, or a pyramid of baby clothes.

Luckily I came home to the latter although I suppose a naked man could’ve been hiding in a Nordstrom bag only to be discovered once I dug through the pyramid of baby clothes, executing the trifecta of husband misery.

My wife had been out shopping for a friend’s baby shower so I wasn’t fazed this time when I saw the pile.

“So do you want to see what I got for them?”  Her plan had commenced.

“Sure,” I reply nonchalantly, thinking about what snacks we had in the fridge. 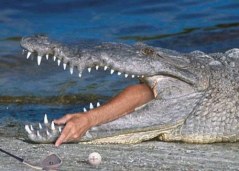 Man, never saw that one coming- they always looked so cuddly on my kiddie pajamas

She went through a few outfits with bees, alligators, and sharks before settling on one outfit in particular. (Let’s make sure every animal that could sting, maim, or kill you is depicted in a cuddly light for the children, thanks baby clothes makers).

She held up a onesie to her chest that looked like maybe an ant could squeeze into if it dieted for a season.

“And I got this for our baby,” she said, smiling.

My eyes darted, my heart pounded, and my brain cells nearly completely overtaken by the last pale ale I drank held on for a last moment to help comprehend the statement before falling completely to their demise.

“Our baby?” I stammered.

“Yes our baby,” she responded.

You’re telling me a human foot is going to fit into that sock?

In a quick attempt to stave off reality, maturation and overall becoming a grown up, I thought back to that recent response card I had sent back asking me if I was willing to adopt a child from Eastern Asia.

Had I accidentally checked the box to adopt instead of the box that opted me in to donate a box of Quaker granola bars?

I mean having a child was something I had wanted at some point, and we weren’t exactly not trying, it was just that I had planned on coming home, heating up a frozen burrito, watching River Monsters-Unhooked and calling it a night, not raising a child.

“Wow, well, that means – wait how do you know?” I asked stupidly knowing there would be a clear and concise answer to this.

We have years of photos from Mars, can send a text message all the way across the world in two seconds, yet obstetrics can’t come up with a more exciting way to tell families they’re expecting?

You pee on a stick and faint pink lines appear. Talk about a letdown. You can’t program in a couple random clowns that jump out or at the very least something that tells you what’s happening? Maybe you plug in what your hopeful response is and then it tailors it to you?

‘After years of trying, you finally did it! Congratulations’ or ‘probably should’ve used protection you idiot’, are far more innovative ways to break the news.  Add aforementioned juggling clown for more expensive models…

“I tried multiple tests,” she confirms. “Plus apparently there’s an app to determine the due date.”

From there it was a bit of a blur, but I know it included a lot of excitement, hugs and kisses and nine-plus months later this bundle of joy arrived.

And now to the point of the blog, I mean pint. Why? Because every new parent could use a pint or two. 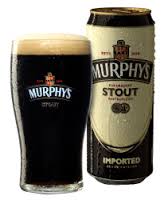 I don’t normally drink stouts, but when I do, I drink Murphy’s. Whoa. A beer company should totally use that tag line and perhaps even base an entire ad campaign around it using a handsome, gregarious, adventure-seeking Latin man.

If you’re not into stouts then this is the beer to try. They don’t typically do much for me but this beer has a scrumptious chocolaty, roasted malt flavor and goes down smooth despite its dark body. It also has a sweet creamy pour with a great head.

The cans come with this nitro-thingy at the bottom of the can which I assume helps with this pouring masterfulness but I actually have no idea. One thing is for sure; it’s amazing what top engineers can create when they put their heads together with the common goal of getting drunk.

I definitely recommend this for those who don’t typically like stouts or just for any parent that needs some R&R.