Tales from the “Big Day”

Preparing for the day of birth is a lot like preparing for Gettysburg. Your gear is packed and loaded, you’ve trained for months, and you’re confident that the agreement you made with your partner ahead of time will stand in the heat of battle. (This is the pact made during a time of calm, enabling one of you to be put out of misery when the shrapnel…um…contractions in the midsection become too much to bear).

Let me get this straight Eugene – you want the epidural if and only if you’re bitten by a rabid squirrel?

My wife’s birth plan consisted of all natural methodologies, holistic breathing rituals, and the elimination of any medical invention developed after the year 1876. It was missing only fairies massaging her feet, and a uterine Pandora shuffling the sweet sounds of Sarah McLachlan as the baby made his serene descent.

My Dad is a real bozo

She wasn’t one of these moms-to-be that just told people she was going all natural, all the while knowing that at the first hint of pain she’d yell for any medical staff within an arm’s reach of a syringe. She was motivated, meticulous, and tenacious in her plan.

If the Donner party had even half the focused plan my wife had, they would’ve been feasting on succulent salmon of instead of their friend Rick.

But then again, we wouldn’t have beautiful Donner Lake, now would we?

Well, for starters, who wants to go to a lake named after the fortunate?

“You guys want to go to Jingleheimer Lake?”

“Which one is that?”

“You know – the one named after that family that just sort of walked through the forest and made it to the other side?” 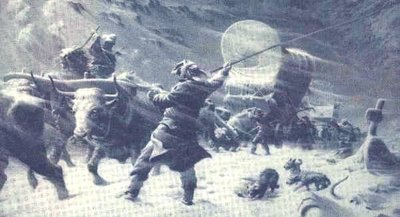 This is the worst party I’ve ever been to. Last time I RSVP to the Donners

The first night in the hospital we went through the usual motions of tests, dilation assessments, and pineapple hands procedures. We were at a birthing center which uses more natural remedies, but I was beginning to think this pineapple hands approach was the only modality in their bag of holistic tricks.

Knowing this, I rolled down my sleeves in case the mosquito bites on my forearm were mistaken for something more serious.

“Alright Steve, let me just slide on my gloves… wait who am I kidding- I can’t fit gloves over these pineapple hands,” I could hear the doctor satanically taunting as he held up his spiky mitts, the envy of every Dole pineapple farmer worldwide.

At one point during our assessment the doctor had to excuse himself to assist another mother who was clearly in more needed assistance than us. They were understaffed and a forceps delivery was about to take place.

For those who don’t know what forceps are, just think back to your arcade days and that glass machine with a claw dangling above a mountain of awaiting stuffed animals below. 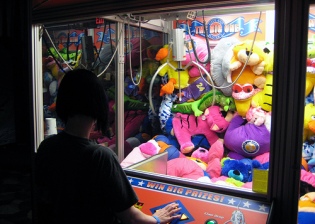 Darn you claw, if you’re not going to get the baby out at least get me that $1 pink elephant

One can only hope that the forceps used to pull a baby out have a better success rate than zero, which was the rate the machine had regardless of how many quarters you poured into it.

Metal claws are what we’ve come to if a baby doesn’t come out? Little harsh no?

What’s the next option if that doesn’t work? Skee-ball that thing out?

Has anyone considered the idea that perhaps the baby isn’t ready to come out yet? If you have to intervene with metal tongs shouldn’t that give you some sort of clue, like hey, maybe this baby isn’t really enjoying this?

Men are merely years away from the first rocket to Mars, we can grow organs in a lab, and most importantly buy any Backstreet Boys album we wish with the click of a button, yet we haven’t devised a better method than this?

It should also be noted that we can also grow an ear on the back of a mouse essentially sending him into a life of solitude because…well who wants to be friends with someone on an ear on his back?

Meanwhile back in a mouse hole somewhere… 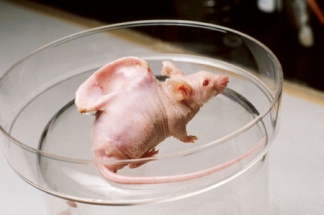 You sure you guys are positive this is going to get me chicks?

“Don’t worry he has his back turned to us, he can’t hear…whoa what the heck man – how’d you get an ear on your back… so… what I said about your cheese wheel, I was totally kidding…”

I stuck my head out the door and expected to see Robocop raring to go, but alas only caught the back of the Doctor frantically attempting to make it into the room before, god forbid, the baby just came out naturally. I did however see a line forming of others ready to give it a go if things didn’t work out led by a construction worker on a forklift and an alligator holding an anvil above its head.

You sure this will help get the baby out Doc?

As I watched the alligator practice his delivery attempts, something told me we were going to end up nowhere close to our birth plan.

I was right, but it wasn’t because of my wife’s lack of trying. It was just that our adventure was only beginning…

And now – what’s in Steve’s fridge?

Tell me again what beer has to do with a baby blog? Well, every new dad could use a beer or two, or ten. This baby stuff is harder than it looked!

For anyone who’s had Lagunitas IPA, you probably are thinking – how does it get any better? Then again that’s what Luigi had to be thinking before Nintendo created Mario; Robin, before Marvel created Batman; Miley Cyrus before the music industry created, well, pretty much anyone else…

And on the 7th day, they created Maximus, a copper, orange bodied double IPA with a tasty finish and crisp, flowery aroma.

I’m not saying Maximus is better than the original IPA. All I’m saying is Maximus is Goliath’s brother – the one who can take a rock to the eye and survive. It’s Elvis with a triple-jointed hip and less beads of sweat jettisoning from his forehead. See what I’m getting at?

You may have foiled me this time David, but Maximus wil get you – I promise you that.

No? Fair enough – neither do I.

Maximus certainly has that heavy IPA kick. Its bitterness has a strong presence, but it’s also complemented with savory, piney hops and brown sugar overtones. This beer must certainly be a favorite of forest-faring lumberjacks with an insatiable sweet tooth. If it’s not…it should be. It also has an enjoyable aroma, a smell you’d encounter out on a coastal hike when you come to a collection of wild flowers.

This is a great beer and at 8.2% it sure beats drinking a bottle of rubbing alcohol which contains about the same amount of alcohol.

You can find this tasty beverage at Bevmo, some supermarkets and specialty beer shops.

Try on some of these recent posts…

I’m Not Touching You

3 thoughts on “Lake Jingleheimer Is My Lake Too”