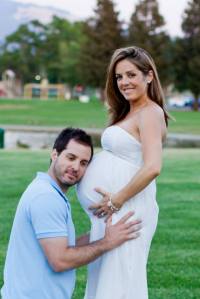 In the school lunchroom if you procrastinated telling your buddy he had brownie smudged on his teeth the worst that happened was his cheerleader crush opted for a much cleaner-toothed date to winter formal.

Procrastinating talking about important decisions with your wife during the final weeks of pregnancy has much graver consequences such as finding your toothbrush face down in the cat’s litter box, your favorite boxers mysteriously vanishing, or your fantasy football lineup set to all kickers.

Your friend found other cheerleaders to pursue and there’s always next week for your fantasy team, but forgetting to circumcise your baby, accidentally circumcising, or choosing the wrong name have longer-lasting effects. 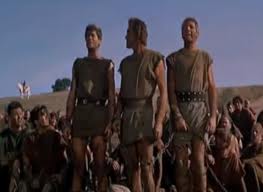 Sorry son, apparently the name Spartacus was more popular than we thought back then. We never intended you finding this out in a field of sweaty men.

Parenting decisions don’t stop with circumcision and names. They are simply warm-ups for a life of important decisions responsible for determining the path of your child’s life. No big deal.

For example, on a recent vacation while traveling on treacherous, unpaved roads through the Costa Rican mountains, my wife had an epiphanous proclamation. (it is true epiphanous is not a word…but it should be)

“I want him to go to a Chinese immersion school,” she confidently announced.

“You what?” I responded stupefied, nearly navigating our rental car off the side of a cliff.

“Yeah, there’s that one down the street from us.”

“You want our son to go to a Chinese immersion school? I’m all for our son being fluent in another language, but Chinese?”

“Yeah, what’s wrong with that?”

“Well there’s nothing wrong with the Chinese language, it’s just that, don’t you think a Spanish immersion school would make more sense, if any language… given that’s the language most being spoken in California?”

“Well he could do international business.” 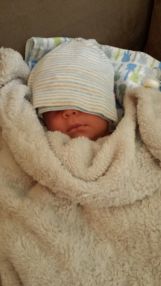 Just rest buddy. Your mom and I will make you an international business star by the time you’re 2.

“International business? He’s the size of a summer squash at the moment. You’ve already got him jet-setting all over the world? He can’t even maneuver through the amniotic fluid yet.”

The biggest debate however my wife and I had was the subject of circumcision.

For those of you not familiar with the differences I’ve provided a diagram below. 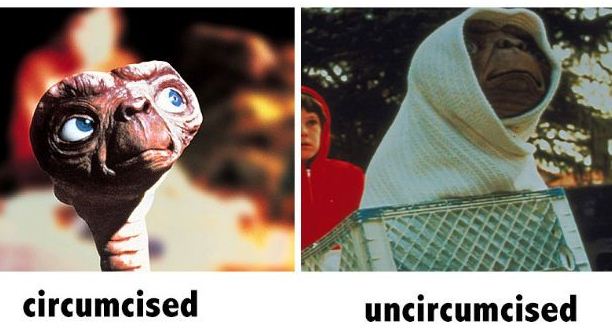 Families choose to circumcise or not circumcise for a variety of reasons, but surprisingly attempting to look like ET on a bike is not one of them.

At one point during the debate one of my friends was brought in as a witness as someone who is or isn’t circumcised (names and foreskin-optional outcome will remain unknown) to help prove the case for that side.

As a result I have a large outstanding therapy bill and every time we hang out now I want to call for mommy and hide under my sheets because there’s a monster under my bed.

Fun fact: According to the internet which is of course 100% solid fact, roughly 56% of the U.S. male population is currently feeling like they’ve always been missing something but not really sure what.

Once you find out the sex of your baby you get to choose a name for the little one. This is a parent’s first opportunity of many to embarrass their child. Calling him muffin, baby, or cutie-pie works for a while, but when puberty hits he’ll find himself on the losing end of frequent trash can stuffings. 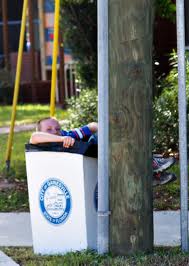 Muffin, come home after your done playing with your friends

I know someone who misspelled her son’s name on the day of delivery and instead of changing it she decided to just leave it.

Leave it? You leave your leftover meatloaf you forgot on the table at Olive Garden. You don’t leave your child’s name misspelled.

I can see their ride home from the hospital going something like this:

“You know what? After checking this app, Wade is actually spelled with an ‘e’ at the end – want me to call the hospital and correct it?”

“Yeah, that sounds right to me too. No one will make fun of him -I’m sure of it.”

The first place you’re supposed to look for names is naming traditions of your family heritage. Neither of mine were much help.

Alright one more child and I’ll get to name him myself! Wait…no… the next one has to be named after my childhood dog’s brother Rex. Gosh Dangit…

Instead they live in utter confusion.

Every male in the Italian community is named something traditional like Vinnie, Tony or Paulie, which is great when it comes time to buy those cheap mini license plates for travel gifts, but quite annoying if you’re trying to get your friend’s attention at the local park. 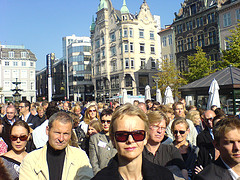 Uh, no I was trying to get the attention of another Tony. That one over-you know what nevermind

The Irish aren’t much better. In order to get a sense of the Irish’s creativity we have to look back to a time when my innovation was needed most: the potato famine.

One can only hypothesize how an island nation went hungry. No one was creative enough to build a fishing pole?

Chances are those darn Brits put some sort blockade on commercial fishing, but no one thought to wade out into the water and spear a crab or two?

Wrestle a mahi mahi with their bare hands? 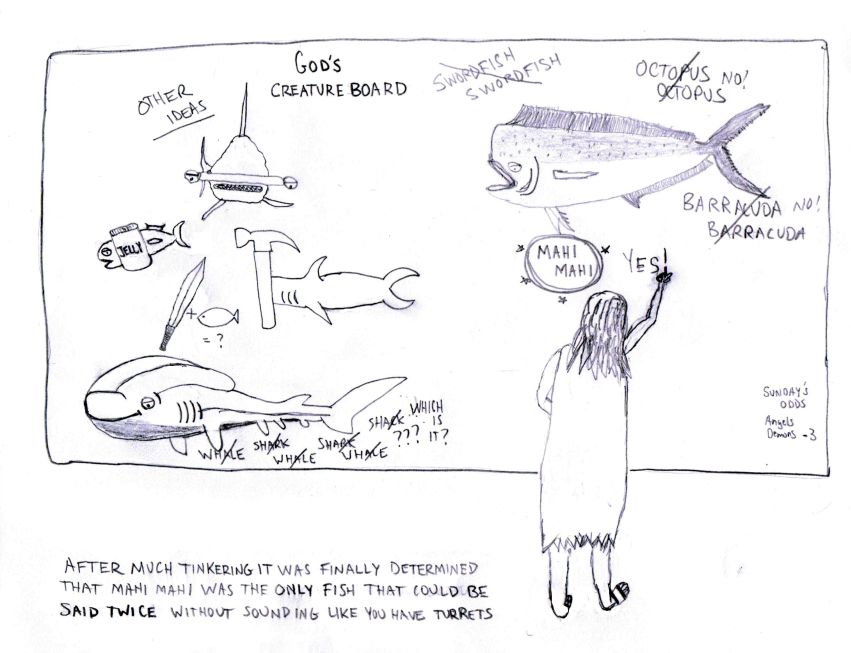 You can view all cartoons that look like they’re drawn by young children here!

Even today seafood is not that prevalent in Ireland or at least not as much as one would think for a country completely surrounded by water.

Then again, if you’ve ever tried to fish when you’re blacked-out drunk, you know that it’s far more likely to end up with a lure in your buddy’s cheek than in a fish’s.

If we had settled on a name with too much Irish flare and combined it with my last name of McDevitt, the poor kid would be pegged as a raging alcoholic his whole life. One name slip up like a Seamus McDevitt and he’d come out of the womb with his own AA counselor. 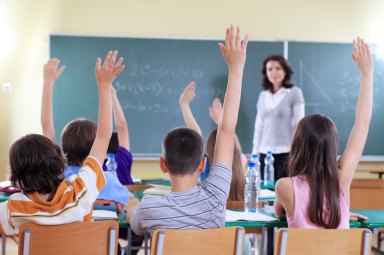 Oh yeah sure – like I’m going to call on that O’Patrick McDevitt kid. Probably has a flask on him filled with Irish whiskey right now

In reality, it’s not the creativity that is lacking for us Irish; it’s remembering what you created four pints of Guinness ago.

Speaking of which, what’s in the fridge this week? Afterall, there was a recent article proclaiming that drinking beer is actually good for generating creative thought. So, what better way to come up with your son’s lifelong handle than doing it while enjoying a cold one?

For those wondering why beer is involved in a baby blog, read more here. 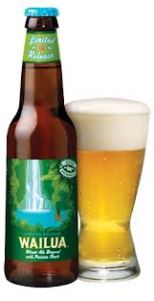 Hey! You in the pool. Do you come here often?

The Belgian monks may brew beer and have a life of zen, but there was one thing they forgot to figure into their brewing utopia – a waterfall abundant island paradise with beautiful women.

Kona brewers truly have it figured out.

This beer’s label alone, which features a sexy girl in a swimsuit wading in a pool of water at the base of a cascading waterfall is enough to earn approval in my book.

Viewing paradise every time you take a swig can cloudy one’s beer judging abilities, so take this with a grain of tropical sand when I say I enjoy this beer.

Each sip of this sun-colored ale seems to teleport me to a tranquil island paradise. Travelocity should ship this beer to homes all over the country when they need to hit end of the quarter travel sales goals.

Passion fruit, the indigenous fruit this beer is brewed with gives rise to the heavy floral and fruity aroma as well as strong taste of this beer. Typically when beers have a fruity taste it is a slight overtone – certainly not the case here. It IS the beer. You don’t have to swash the beer around in your mouth, stick your nose in the air and claim to taste sugar and spice and everything nice just so your beer snob friends think you’re educated. It will literally hit you like a ton of fruity bricks on your first sip.

Overall this is a great daytime beer, perfect for warm days or really any day you want to visualize a hot girl swimming near a serene waterfall.

I picked up this beer at Bevmo, but you can often find it at local markets and supermarkets. Its parent beer – Kona Island Lager is pretty common everywhere and is a lighter, less-fruity version of this concoction.