A tale of a father’s first fathering attempt solo

Excuse me, would you mind not crying for just like one second? No? Ok please don’t attack me

Watching your baby alone for the first time can be a breeze for some, but a lot like being imprisoned in the same dark quarters as a large game animal for most.

There is a lot of wrestling, clawing, attempts to break free, and sobering cries for help, but in the end no real progress is made.  The best one can really hope for is that no one loses an eye, their long-term sanity, or all of the six binkies with which one started.

My first time was nothing short of a savage catfight.

This will be a cinch I thought to myself as my wife departed leaving behind the impending carnage.

I sat down next to the sleeping lump on the couch and began to plot my afternoon. 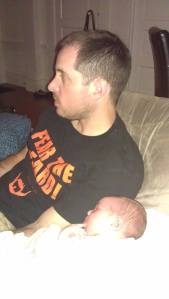 This is parenting thing is a piece of cake

Kindle charged and ready for some reading?  Check.

Beer chilling in the fridge for when my wife returns? Chec-

Before I could finish my thought the sleeping lump had broken free of his cocoon and morphed into a teeth-gnashing, raging, monster. (Yes, I know babies don’t have teeth, but somehow this one did at this very moment).

Wait- what just happened? Did I black out and miss two hours? Now what do I do?!

I did what any new dad would do in this situation which was look around the room in confusion as if I was looking for my keys I swore were just there.

Note: This is not my baby; this is only a reenactment

I cried out for help.

It was like a first night in prison and one’s cellmate with deep-rooted anger issues and a not-so-innocent plight on his mind for the last 12 years just realized he had a bunkmate for the first time.
“You’re mine now, punk,” I could hear him taunting me.

Ok, calm down. Deep breath.  No need to worry. My wife will be back in – I checked my watch and did the math…nine hours!

His cries began to increase in frequency and decibel due to my inefficient response time.

There’s got to be someone who can help.

You there in the backpack! Help!

Anyone with a pulse nearby?

And then it hit me.

Wait, I’m a father? When did that happen?

I can do this!

I got to work. 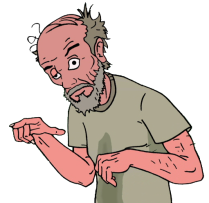 You may have won this diaper change baby, but this is NOT over

The first thing I did was change his diaper which concluded with one of us walking away with a scratched nose, poked eye, and a shirt stained with urine. A typical journal entry for an inmate in a prisoner of war camp had just become my reality.

I can’t say for sure, but the scratched nose may have come from the result of my putting his head through the sleeve of a clean shirt instead of the head slot opening. It can be neither confirmed nor denied but if a jury of my peers were given the opportunity to deliberate, they’d have the verdict in fifteen seconds.

Go ahead and grab your friends and feast. I won’t feel a thing

The next attempt at restoring order was vigorous bouncing on a yoga ball which stopped his crying momentarily but ended with a gallon of vomit all over my shirt. It was also the most intense back workout I had ever done. A swarm of locust feasting on my back flesh would’ve resulted in less of a burn.

Exhausted and vomit-soaked, I crashed on the couch. I checked the clock expecting to see that at least two hours had gone by.  It was 12:17. Eleven minutes had elapsed.

This whole father thing was way tougher than I thought.  If there was an un-dad of the year award, I had certainly put myself in a prime position for a nomination.

The next few hours consisted of a multitude of bottle-feedings, burping attempts, diaper changes, calming walks, and more sock replacements than I care to count. Those elusive pieces of knitted cotton seemed to find their way to freedom every thirty seconds. Where are all these socks headed that they need to make countless escape attempts like a prisoner at Alcatraz? Is there a life of sock luxury they yearn for somewhere behind or underneath a couch at some unknown rendezvous point? 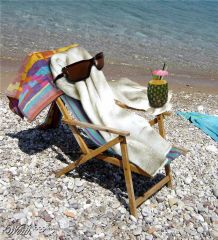 At some classified  location, there is a group of socks partying their yarns off – I guarantee it.

At one point, when pulling a bottle of milk out of the refrigerator, I knocked a carton of organic, pastured  eggs off the shelf. Without a hand for catching, I could only watch as they catapulted to freedom, breaking free of their carton prison. Credulously I hoped they’d find a soft landing on the kitchen rug, but unfortunately they met their swift demise smashing into hundreds of pieces of shell and gooey yolk upon impact with the kitchen tile. As I watched the yolk ooze onto the kitchen rug, I frighteningly remembered how excited my wife was when she brought them home since the store was always out. A premonition of me entering a coop and plucking eggs from the underbelly of some unsuspecting chicken at a farm TBD crept into my mind.

Finally, at some point a miracle happened and both of us fell into a deep sleep.

I awoke to a door opening and my son starting to whimper. 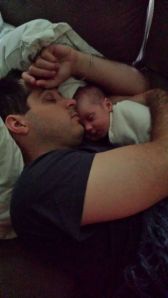 “What happened?” my wife quizzed, rushing in to see what the fuss was about.

My punch-drunk, groggy response was only incoherent babble.

“It’s because his sock fell off. That’s why he’s crying,” she responded to her own question.

“Why did you take his sock off?”

She replaced the sock and he immediately stopped crying.  (Apparently the 41st sock replacement is key).

“You know what? I don’t know why I took his sock off,” was all I could muster.

I was only kidding! I really wasn’t that upset

“Not a problem, didn’t give me any trouble at all,” I lied.

She looked around and noticed what could’ve easily been a war scene out of Saving Private Ryan.

Bottles of breast milk were leaking out onto the floor, the stroller was upside down on the table, multiple drenched shirts were strewn about, the cat was lying in a puddle of vomit, and a binky was hanging from the fan.

The Monday work day could not come soon enough.

But, as I closed my eyes and nodded back to sleep a warm smile of accomplishment formed on my exhausted face. I had done it. I survived. And I was a better Dad because of it. Perhaps I won’t be nominated for the un-dad of the year award after all.

I was jolted from my slumber.

“What happened to my eggs?!”

This blog was brought to you by: Violet Alice Boutique : Handmade Goodies for Mamas & Babies (My friend Rachel is very talented – check out her stuff!)

Need a beer to ease the stress of a night alone with the innocent-looking beast? You’re in luck because you’ve made it to that portion of the blog.

One word you won’t find in Stone Brewery’s Employee Handbook is “Half-Assed.” Their beers are always crafted to a fully-polished state of complexity. This robust brew, exploding with unique flavors is no exception.

Created on the same west coast IPA canvas that produced the infamous Stone IPA, this Belgian-IPA joins  hoppy IPA crispness and Belgian fruity yeast-borne esters in jovial-beer-matrimony. This is one couple you definitely want over for couple’s game night.

Finding this beer is easy through Stone’s beer distribution list.

2 thoughts on “A Father Alone with the Beast”