What do you do when you don’t have time to post new content on your blog? Naturally you re-post a previous post! This one got more views than other other posts on the blog and is great for anyone going through a pregnancy… who also loves beer of course. Don’t want to read about babies turning into picnic snacks? Scroll to the bottom and read about a review of the greatest beer on the planet – Pliny The Elder!

With first trimester comes an emotional roller coaster of mood swings, nausea, and bizarre food cravings. And then of course there was how my wife was feeling.

Alright Rex, on three we start… one…two…three… how come you’re not doing anything? What’s that? You are? Oh boy…

I was about prepared for a pregnancy as a Tyrannosaurus was for a face-slapping competition with Gumby.

How did this actually happen, I kept asking myself, and I mean that in a good way. I can’t even navigate my way home from work sometimes and I’ve done it a hundred times. How on earth did my sperm find its way? It must’ve been pure coincidence. Like for example, the sperm accidentally backed over an object while driving in the fallopian tubes and it just happened to be the egg? 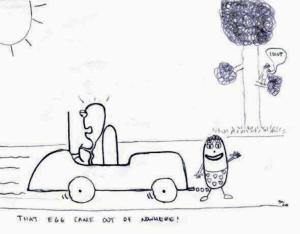 (Amazingly this comic was not drawn by a newborn…that’s 33 years of doodling expertise right there. You’re welcome.)

There are plenty of books, articles and movies for women in the first trimester and rightfully so, but not as many for dad. The ones that are available however are pretty good. It’s just that I didn’t read them. 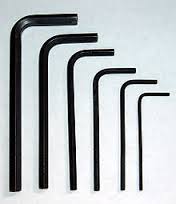 If the first trimester was a piece of furniture it would be one of those Ikea dressers that come with four less holes than screws just to make you think you’re an idiot and did something wrong. Month three hits, and you’re left standing in your kitchen watching your wife devour a carton of Rocky Road ice cream and all you have to show for yourself is a worn down allen wrench.

One day you’re absolutely ecstatic and the next day you’re frantically scanning the bus schedule for direct routes to Portugal.

How am I going to afford this thing?

What if he or she hates me?

What if he comes out as the devil reincarnated like in that movie The Omen and begins plotting my demise? Say I come home on a random Tuesday and find him in my den with horns and pointing a fiery pitchfork? 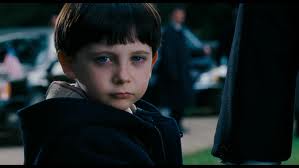 Yeah remember that time I told you to clean up your room? I was totally kidding! Ha!

These were the things keeping me up nights.

My wife downloaded another app which gave her dynamic news for every week of the pregnancy.

Her favorite part was telling me what the baby’s size was each week.

“This week our baby is the size of a pea,” she’d tell me.

Another week it was the size of a plum.

Jesus, did my wife get knocked up by the cast of Farmville? Or did Yogi the bear surreptitiously make his way into our apartment with his basket while I was at work, put the moves on my wife, and now she’s filled with picnic snacks? 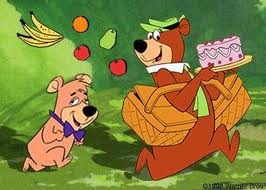 How does the app determine what your baby’s the size of anyway? Is it fruits and vegetables for every city or just the ones with the propensity to for healthy eating?

Meanwhile at the baby app headquarters…

“We’ve got another subscriber here boss- this one from San Francisco.”

“Dynamite work Jimmy, let’s turn their baby into a fruit salad, followed by a hummus dip, and then hit them with honeydew for the third trimester. That will shut them up.

What about in other parts of the country?

“Another one boss – looks like a Houston baby this time.”

“Great job Jimmy, ok let’s see, make it a doughnut, then a beef brisket, and at 22 weeks, make their baby the size of the largest Big Mac the world has ever seen.

This app is the only one created that was successful in making me actually want to ingest my baby. By the 26th week, I was a full-fledged vegetarian.

Wait a second… that’s not an eggplant parmesan! I’ve been bamboozled

The first trimester is also when medical professionals ensure you don’t sleep at night. At the end of an appointment you receive a document informing you of the exact chance your child will have some horrific disorder, as such, one previously found only in manatees.

“So there’s a 1 in 321,000 chance your child will have a condition that will actually swap their left foot and their genitalia,” the Doctor tells you after careful examination.

“Doc I don’t think that’s possible – so let me get this straight, my kid could possibly come out with a penis for a foot? Is that even legal?”

“Yes, and after examining with close precision looking on this monitor here, we’ve also determined with nine percent accuracy that your child will have a higher incidence of Indian burns when he or she is older.”

“Like the ones you get when someone turns both hands on your wrist in an irritating manner?”

What if your child comes out ugly?

Well after the Doctor’s assessments I would’ve been happy with a cross-dressing, hippy, peg-legged transvestite for a child, as long as he was healthy…wait a second did you just say Yogi Bear?

That son of a…

And now to the bear I mean beer (darn that Yogi!) portion of the blog…

What beer is in Steve’s fridge? 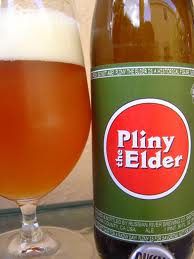 This beer is so good it literally is no longer in my fridge because I’ve drunken it since I started writing this sentence.

Have I mentioned this beer is amazing?

The taste of this beer is the epitome of perfect balance – hoppy, but not too hoppy. Malty but not too malty. Fruity but not too fruity. Sweet but not too sweet.  I mean who are these guys? They are the perfect ying and yang of beer making. No ingredient is too much or too little!

These guys could seriously throw any ingredient in and it would come out perfect.

“Bill what if we threw in this old moldy sock?”

“Mmmm… not bad… a little moldy, but not too moldy, perfect…”

This is a heavy IPA yet goes down as smooth as blackberry lemonade at a hot day which makes things a little dangerous with its high alcohol content.

Unfortunately this beer is almost impossible to find. You have to go directly to the brewery or be lucky enough to find it at a bar, but unlike Lewis & Clark’s discovery of North Dakota, it is worth the effort.

Try on some other posts for size:

There’s an App For That