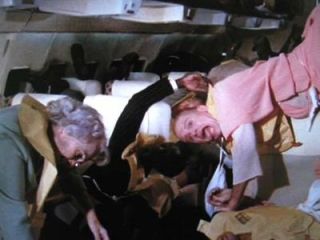 As soon as we hit, you change the diapers and I’ll go out for a pint, sound good?

Tales from the 3rd Trimester

Getting ready for the immediate arrival of a baby is a lot like riding on an airplane and the attendant announces all passengers should assume ‘crash positions’ just before plunging into the Atlantic at 600 miles per hour. As if the position of your body will make any difference when the plane obliterates into a thousand pieces of fiery debris.

The passenger to your left has her face in her hands, the guy to your right is hanging upside down, shirtless, clutching the barf bag tightly in one hand, and you’re in your living room clinging to your PlayStation, Playboy collection, and neon beer lights hoping for a miracle of readiness.

None of the positions matter, ready or not.

“So… are you ready?” your friends ask with a sheepish smile.

Other than that Mrs. Lincoln – how was the play?

“Yeah I’m ready, but I’ll be more ready once my fantasy baseball, kickball, and keg stand leagues come to an end,” I reply. 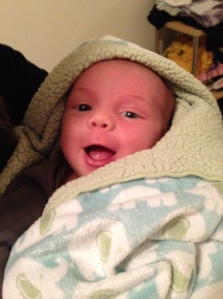 Ready or not, here I am!

Chuckling, they reply “you won’t be able to do those things again,” as if they’re a guard at a POW camp and just chopped off the tips of your fingers after finding out you’ve always dreamed of being a famous pianist.

I was nowhere close to ready, and had a “to-do” list on the refrigerator with a collection of unchecked boxes for validation of that hypothesis.

Then again, what exactly was I getting ready for? I realized I actually had no clue.

I might as well have been Christopher Columbus sailing the ocean blue looking for undiscovered splendors not knowing if I’d find land or be swallowed whole by a ginormous, man-eating sea anemone in the diaper aisle at Babies R Us.

I could probably run an orphanage for forty years, have a mansion filled with cribs, and a swimming pool with breast milk oozing over the sides and I still wouldn’t be ready.

When it happens, I’ll be ready I thought.

I’ve now changed that statement to when he’s seven, I’ll be ready, now that my previous prognostication was completely and utterly incorrect. I also reserve the right to update that when he’s six and a half.

And they look so real in the ad…

I had a cat growing up but he had already been self-sufficient for years before I even showed up on the earth. I cared for a goldfish when I was eight I had won at the fair but my cat ate it after one day. The most experience I had actually caring for anything was a tank of sea monkeys, and I’m fairly certain they were just a marketing gimmick and never actually existed.

How am I supposed to be “ready” for a human being?

Thanks stork, just leave the baby over there by the nintendo cartridges. My wife will take it from here I’m sure. Right? Right ? Hello?

But, does it matter? I mean, dads don’t have any role in the birthing and child-rearing process correct? We just sit at home, wait for a stork to arrive and then trudge our way to the office for eighteen years to support the thing right?

In 1954 maybe, but somewhere along the way a couple of dads got a bit too motivated. Now we’re required not only to support the child, but also do things like feedings, urine-spraying diaper changes, and middle-of-the night burping’s that result in vomit flowing down our backside as if we’re the main character in a R-Kelly meets Saw VII movie production.

Naturally though, my wife took more of a role in the birth research. And when I say more of a role I mean that if she and Dr. Jonas Salk had begun discovery for a cure for polio at the same time she would’ve beat him to it before he could even focus his first microscope.

Modern science has things all wrong. They should put her in a room with a collection of medicinal Rainforest plants, a box of baking soda, and a Netflix account with a queue jam-packed with documentaries and she’d find the cure for incurable diseases in an hour.

Baking soda is truly world’s finest invention. You’d think the public would be weary of a product that you can use to bake cookies and cure hemorrhoids  in the same night, but obviously Arm & Hammer figured something out.  Honestly I don’t know why we’re not building planes out of it; there’d probably be a lot fewer crashes with the magical powder at work.  You can literally use baking soda for everything.

“Captain, thank god you had one of those baking soda planes. Not only are all the passengers safe, but your mosquito bites have also cleared up. Would you look at that?”

Who wants to fight to the death for this shirt only to discover it is a child’s medium and is so wrinkled no one will be able to wear it?

There are more theories on the birthing process than there are ex-girlfriends of John Mayer. There’s a natural birthing method. There’s a drug-induced birthing method.  There’s even a method where the baby is somehow shot out of a canon gun like those ones you see at sporting events. The best part about that method is you don’t have to trample sixteen other fans in an attempt to catch a wrinkled t-shirt you’ll never wear.

The reality is, no matter what your birth plan is, how much you’re ready and what sort of creative crash position you can create, you’re never quite ready. And the actual process never goes as you’ve planned.

That’s why the best thing to do is throw yourself sideways over the seat, close your eyes, and stock your fridge full of beer to help ease the stress.

Speaking of which, what’s in Steve’s fridge this week? 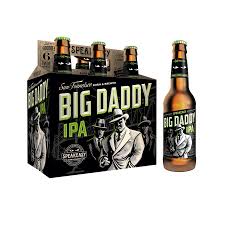 I certainly enjoy this beer, and would sum it up as a nice IPA. Not spectacular, but nowhere close to horrible.

Nice guys may finish last, but nice beers finish…well in your refrigerator courtesy of one Michael J Fortson after showing up unannounced at one in the morning and crashing on your couch.

I like this beer, but look, I was never looking for a relationship. Plus it calls way too much.  And it asks if I’m mad constantly. And it frequently asks if it is too fat…and…sorry…ok back on track here. (Is this the second entry in a row he is comparing beers to women? This guy is a jerk).

If you’re trying to simulate the emotions of the first trimester, this is the beer to try. Its flavor, aroma, and feel change more than a sixteen year-old girl getting dressed for a first date with the high school quarterback. One sniff will send you running to the ear, nose and throat doctor thinking you have a family of bacteria living in your nostrils, but another will send you on a journey through fields of citrusy paradise.

The bottle states “clean dry finish that leaves without a trace.”

I would’ve gotten away with it if it weren’t for those pesky , no, no actually I tripped on my shoe lace.

This beer’s trace is about as inconspicuous as a burglar found the next morning hanging from your chandelier by his shirt collar after unsuccessfully attempting to flee your house.

If by “without a trace,” they’re referring to the Band-Aid soaked in lemony cleaning solution aftertaste, then yes; completely without a trace.

Just to get another opinion I had my wife try it.

“It tastes like tuna,” she decided after one sip.

This beer wears many hats. Tuna was certainly I didn’t think was one.

I had her try it again.

“It has a tuna can aftertaste.”

Tuna can? This was getting worse.

If I had given her another sip my beer would’ve been confiscated on the spot and shipped to a local sushi restaurant to be rolled in seaweed.

Despite the bi-polar qualities of this brew it is a worth a try and if nothing else you’ll go through a six-pack just trying to figure out what is going on with it. I wouldn’t rank it in my top 5 IPA’s, but it would definitely be in my top 10.

You can find this beer at almost any market in San Francisco, Speakeasy Brewery, Bevmo, and many supermarkets especially in Northern California.

Fun Fact: The Speakeasy Brewery opened in San Francisco in 1997 in an area once known as Butchertown. 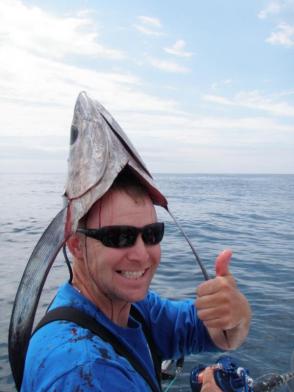 I certainly didn’t expect this to show up for my google search of “tuna hat.”

4 thoughts on “Assume The Position”