You see every time I get to this part of the rainbow – just poop everywhere. Can’t figure it out.

Potty training your child may sound easy. It’s not. It’s like any other form of art. You must be creative, imaginative, patient, and dedicated to the craft.  And just when you think your canvas is fully complete, you look up and you’ve got poop all over yourself. In other words, it really sucks.

The first question parents ask is “when should I start potty training?” If you have to ask this question you are weeks, possibly decades away from freeing yourself from the enslavement of diaper-changing. Your child is not ready and it doesn’t matter how many different types of plastic toilets you’ve ordered off Amazon. It will commence whenever they are ready or when you start ingesting the diaper cream because you’ve gone mad pontificating the idea – whichever comes first.

Some kids adopt early without issues and others work at a slow pace. Some parents get lucky without effort (everyone hates these assholes), but most have to implement a strategic plan, often over a period of time only to have it finally magically click one day. (For no particular reason really).

There are two things you can try:

Both options may result in about the same outcome. Goal for both is simple. Get that ornery, crazy human to poop in a toilet instead of on your gargoyle sweater, rug, or on the head of your other child.

A reward-based system is great as long as it eventually stops. No one likes the 22-year old who asks co-workers for a chocolate chip every time he uses the restroom. And frankly it’s really uncomfortable when a trucker reaches under the stall next to you at a rest stop and asks for his treat when he’s done doing his business. Chocolate, stickers, and toys are great just to name a few. These work great for your kid too. (I said it was uncomfortable – I didn’t say truckers don’t enjoy treats, now did I?)

I just went #1, where is my sticker punk?

Make sure they know what a great job they’re doing regardless of how many undergarments, or  pets they’ve soiled during the process.

There are colored pellets you can buy for the bath that colors the water. Put one in the toilet before peeing time and they’ll love to see what color they’ve created. And I know from experience, this will also entertain husbands for hours. Frankly I had no idea my urinating apparatus was capable of creating so many beautiful pastels that combine with yellow. I can die in peace.

4. Don’t worry what others will think of you… or actually worry

I often taunt, I mean, I hear “friends” taunt their child that other kids younger than him are using the potty with no issues. How embarrassing for him. What parents are really saying here is other parents are judging us and you sure as hell better get this potty thing down before we’re completely ashamed and can no longer hang out with the Johnson’s. Parents are really mature like that.

Children are funny creatures. It can be difficult to comprehend the world through their eyes. A friend was having trouble potty training and finally asked her son why. He thought a monster was going to grab him through the toilet and pull him in. Naturally, I too, would’ve been scared to death to hop on that toilet. Once she discovered the reason she was able to assure him that wouldn’t happen. Because monsters can’t swim of course. Everyone knows that.

If they’re not ready, pushing them into it could delay the process more. Often you’ll have to sit in the bathroom for a while with no results. Don’t get discouraged, it will happen eventually. I think. I only hypothesize this because i’ve never met an adult in baby diapers. 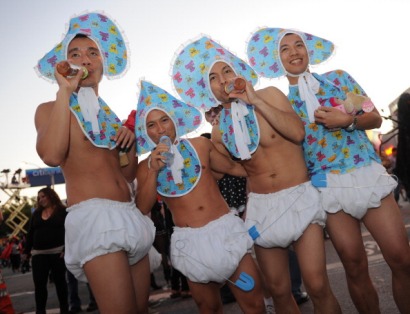 Oh. Well. Nevermind. Apparently there are adults in diapers.

Take his mind off the task at hand and read some of his favorite books. There are potty books too. Removing the pressure might help things move naturally, literally. If that doesn’t work you can try having him poop directly on the potty book.

This is the Normandy Beach of potty training and there is no going back. Get rid of your diapers and warn him that the diaper fairy is no longer delivering.  Put him in training diapers, underwear, or any other item of clothing that you plan to never see again and then hold on for dear life.

This works for a little while until one’s neighbors start complaining about seeing a naked, grown man wandering around in your upstairs den. If this doesn’t work try having your child go naked instead.  This works for some parents as the lack of safety from a diaper leaves your child with no choice but to use the potty. It’s also a great method if you’ve been trying to convince your mate that it’s time to replace the carpet.

None of these tips working? At least you have beer. Here’s one you can try or have 12 of as you forge ahead. 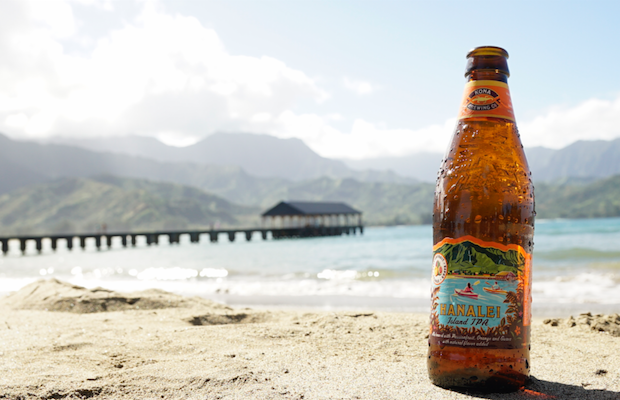 I’m 100% convinced that this beer is made with island spirit. Literally. Guava, passionfruit and oranges are just the start in this tropical bounty rich with a Hawaiian essence. It’s as if brewers went outside on the sandy beaches of the big island and simply left empty bottles open on sand for weeks and this was the result. If I was told that the kayakers shown on the label were physically added to each bottle I wouldn’t think twice.

Let’s talk island turkey though. This is not an IPA. This is barely a beer. In a blind taste nine of ten tasters would probably guess pineapple juice. With that said, it is a really tasty beer. You could easily kick back and drink a six-pack and still kayak your way home through Tiger Shark- infested waters.

The bitterness of the hops are balanced by a collection of island fruit but it’s balanced like a whale shark on a seesaw with a sand crab. In other words, this is the least bitter IPA on the planet.

WARNING – IT IS IMPOSSIBLE TO GET DRUNK ON THIS BEER

For reference here is where this ranks in terms of ABV:

Sucking on a gluestick 1.2%

i think you get the idea. If you can’t find rubbing alcohol to drink on a nice beach day, reach for a Hanalei IPA instead.